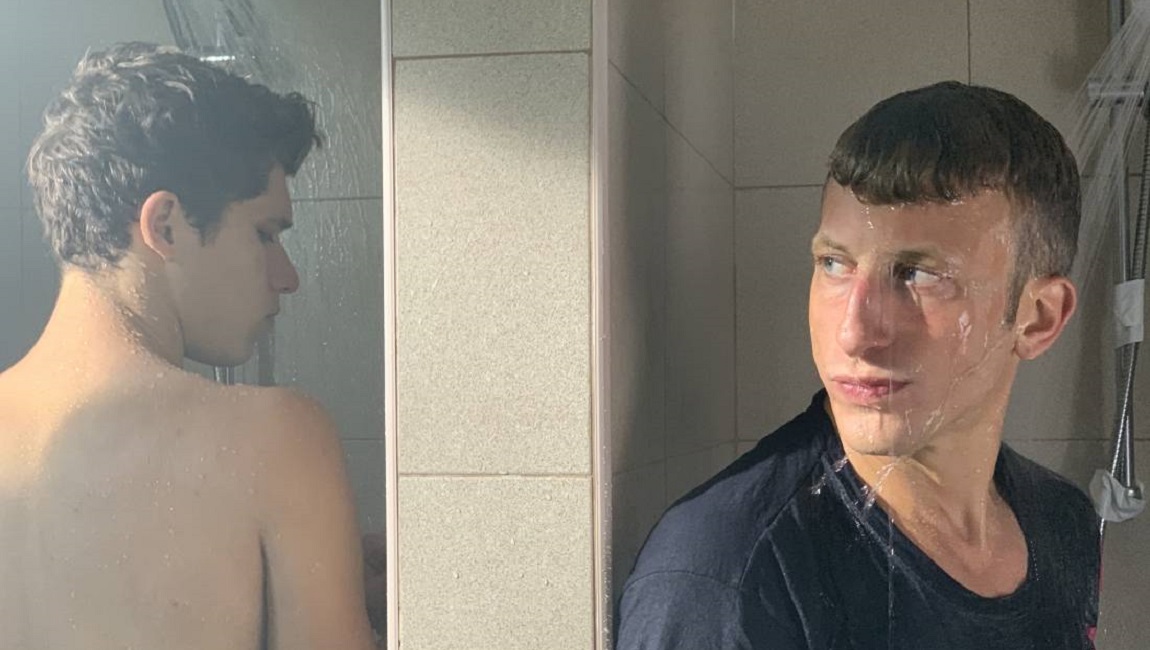 The Swimmer is yet another skin-thin film about gay men that is unfortunately more interested in titillation than characterization.

The Israeli gay coming-of-age drama The Swimmer arrives one week after Bros, a big-budget studio comedy that attempted to woo mainstream audiences by taking the framework of your basic romantic fluff piece and adding a queer spin. That it bombed spectacularly shouldn’t be too surprising, considering it starred the abrasive Billy Eichner and, well, wasn’t very good, its self-congratulatory tone proving as obnoxious as its leading man. But at least Bros featured characters who could occasionally crack a smile or two, something sorely missing from the majority of the queer films clogging art house screens, and The Swimmer is no exception. If anything, the clichés it peddles are even more enervating than those offered by something as blandly generic as Bros, the stink of pretension and “importance” permeating every scene. Writer-director Adam Kalderon based the story off his own experiences as an Olympic-bound swimmer, but that conceptual intimacy doesn’t lend much to the proceedings; indeed, what’s sorely lacking in The Swimmer is a sense of authenticity, which is instead replaced by countless shots of men in various states of undress, another staple of this particular genre.

It’s not the least bit surprising that the film opens with a close-up of a gorgeously muscular torso, positively rippling as shaving cream is applied and a razor is used to reveal the opening credits, an ‘80s-esque synth score pulsing in the background. Is it eye-catching? Yes. Is it the most clever moment the film has to offer? More on that later. Omer Perelman Striks stars as Erez, the twenty-something titular athlete who, as the film begins, arrives at a secluded training camp somewhere in Israel. He is one of five men who are vying to obtain the lone spot on Israel’s Olympic swimming team, because the country can’t afford to send more than one person. Erez is beyond determined, his drive to succeed matched only by his love of Madonna, a character detail which here functions as a clue that Erez is both gay and closeted, a fact made clear as Erez ogles his teammates in the showers and, at one point, steals one of their speedos so that he can smell it while masturbating. Subtle The Swimmer is not. The trunks in question belong to Nevo (Asaf Jonas), a strapping young lad to whom Erez takes an instant liking, even though it is soon revealed Nevo is straight and has a girlfriend. Nevo soon proves a distraction for Erez, one that could put his Olympic dreams in jeopardy. This certainly upsets the gruff swim coach, Dima (Igal Reznik), who makes it very clear that he has his suspicions regarding Erez, and that if anything unseemly happens, he will not only throw him off the team, but report his findings to both Erez’s parents and the proper authorities. But later, there’s a scene where Dima seems a little to happy to help Nevo with his speedos fitting, because why not throw in another closeted character, one who is clearly only targeting Erez because of his own insecurities. Erez at one point also essentially states to Dima that he will sleep with him in order to get the Olympic ticket, a plot detail the film introduces then quickly forgets, perhaps because Kalderon realized that painting his closeted lead as someone who is willing to indiscriminately sleep his way to the top is a fairly offensive place to take this character.

The Swimmer isn’t so much a movie as an 80-minute excuse to show ripped men in as little clothing as possible. Had Kalderon attempted something in the vein of Claire Denis’s Beau Travail, which utilized  the male form as symbol of heightened masculinity within its militaristic setting, more meaning could have been teased out of this film. Unfortunately, he is no Denis, and the majority of The Swimmer looks like an Axe Body Spray commercial from 1998, the camera catching each bead of sweat as it rolls over its actors’ rock-hard abs, with Erez practically drooling on the sidelines. There’s nothing of interest in regards to the actual storyline, its tale of personal obsession and acceptance proving as skin-thin as its photography. The film only comes alive in its final moments, when the qualifying race is intercut with scenes of the five swimmers performing a choreographed dance number in an empty pool. Sire, it’s a rather blunt visual metaphor for to its lead character’s internal struggles, but doesn’t make the sequence any less thrilling in action, as it’s the only moment where Kalderon feels fueled by something other than cheap titillation. The Swimmer ultimately joins a long line of gay films that will unfortunately inspire more erections than substantive discourse or deep consideration.