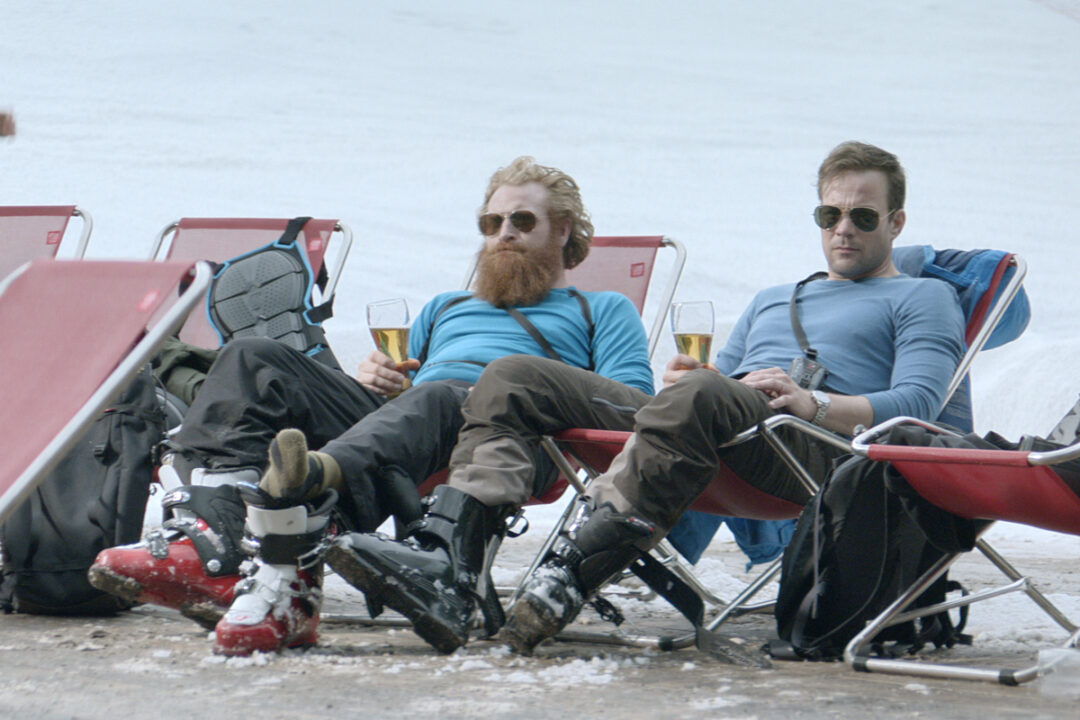 Though it touches upon the comedy of remarriage film, the family vacation film, the bourgeois critique film, and the male-id exposé film, Force Majeure is nonetheless first and foremost something like a science-fiction object, the kind of thing that some heretofore-undetermined future intelligent species might ponder over in collective amusement. What it shows us is a visual dialectic of inherent absurdity: a natural landscape — the Swiss Alps — of imposing vastness and even more imposing indifference, and swarms of white vacationers bundled up with their families in cumbersome winter uniforms. Beside them is a modernist resort at once expertly fused with the snowy environment and fundamentally intrusive. (At times this milieu suggests the industrialized European ski retreat of Nicolas Rey’s 2006 experimental film essay Schuss!, another work that trades time between poetic description of a setting and clinical documentation of the people within it, in the process rendering its occasional human subjects as comic specimens against an obstinate backdrop.)

Director Ruben Östlund never departs from this bedrock of unnerving visual incongruity, composing everything with an impeccable eye for the simultaneous functionalism and unwelcoming frigidity of symmetry-obsessed structures. One mechanically screeching structure shown early in the film, for instance, suggests a transportation tube for space explorers, though it’s really just a glorified magic walkway for ascending skiers. Östlund’s subject of choice is a Swedish family that has willingly chosen this vulnerable mountainous fortress as a place of luxury, yet a persistent irony of the scenario is that the family’s privileged economic status has essentially gotten them into a situation where they are particularly defenseless against fate — the superior, uncontrollable force suggested by the title. On the second day of this chronologically structured weeklong wintry sojourn, while the hitherto-inseparable quartet dines at a swanky patio overlook, a monstrous avalanche comes rolling down the hill, briefly threatening to swallow the restaurant’s inhabitants whole before fizzling out in a cloud of condensation. With the exception of the arrival of the patriarch’s old friend and his 20-year-old flame halfway through the film, this sudden near-tragedy is Force Majeure’s only plot event, and the film’s remainder observes its psychological reverberations.

As has repeatedly been noted, this inciting incident echoes that of Julia Loktev’s The Loneliest Planet in hinging on a male character’s impulsive act of self-preservation at the potential expense of his loved ones — in this case, the fleeing of a father, Tomas (Johannes Kuhnke), from the avalanche to leave child-protection duties to his wife Ebba (Lisa Loven Kongsli). Structurally comparable as the two films are though, Force Majeure’s sociologically precise situation points it less toward the experiential abstraction of Loktev’s film than toward a realm of behavioral analysis. Unlike the characters in The Loneliest Planet, Östlund’s characters must confront the elephant in the room or else risk shattering their carefully mounted home-away-from-home harmony. Tomas and Ebba have a pair of impressionable toddlers, Vera (Clara Wettergren) and Harry (Vincent Wettergren), from whom they must attempt to shield conflict, and Tomas’ divorced friend Mats’ (Kristofer Hivju) eventual presence only amplifies the need to exorcize lingering tension.

What most interests Östlund, however, are the surface-level elaborations and justifications that his characters use to ignore the unfathomable curiosities of animal behavior and the greater unknown.

It’s predictable enough that the spineless Tomas descends quickly into pathetic denial of his own actions and eventually existential despair over his flailing status as a pack leader. Also predictable, though certainly riveting to watch, is the way in which Tomas’ suppressed guilt becomes a kind of contagion infecting everyone he comes into contact with prior to the event, a sense of airborne friction of which the director has a formidable dramatic grasp. What most interests Östlund, however, are the surface-level elaborations and justifications that his characters use to ignore the unfathomable curiosities of animal behavior and the greater unknown. Sure, it’s not entirely untrue that men are thoughtless survivalists and women selfless caretakers; that the media presents a mode of heroic behavior that simply does not exist in the realm of actual high-pressure situations; that different generations have different attitudes toward the roles of mother and father. But Force Majeure is less about these nuggets as it is about people who, in an especially stressful position, fall back on such generalities to comfort themselves, however temporarily.

All of this might seem a facile platform for Östlund to assert superiority over the material; indeed, one could imagine the same central premise retooled for a super-cerebral smackdown of the pathetic pile that is the human race. But Östlund is too playful a filmmaker to succumb to such finger-wagging didacticism. The largely frosty Force Majeure is repeatedly thawed by a sense of humor that suggests Fellini on downers — reined-in burlesque, in other words — and a philosophical interest in the role of chance, so powerful a force in life as to upset even the film’s own controlled surface (as it does in a sublimely amusing moment that fleetingly assumes the point of view of a remote-controlled flying toy at the most inopportune time). Despite the film’s overarching Scandinavian austerity — Östlund’s shots rarely move for fear of displacing the careful merging of compositional lines with the corners of the 2:35:1 frame — it’s also cinematographically in tune with its characters at pivotal moments in ways that suggest a sharp directorial sensitivity. It’d be hard to imagine Michael Haneke — who’s been cited in relation to Östlund many times — going for either the subtle jib move that occurs late in the film that imagines the weight of Tomas’s despair hovering over him; or, more broadly, the bizarre non sequitur of scantily clad ski bums throwing an impromptu rager with keg stands and projectile vomiting as a way of throwing into relief his anti-hero’s glum quandary.

Force Majeure’s early scenes rarely depict the family outside the same frame, a clear-enough sign that there’s a certain ingrained domestic performance going on. Despite the obvious cloud that hangs over them later, the film’s closing scenes self-consciously revive this pictorial togetherness, first in a fog-shrouded false alarm on the slopes and then in a nail-biting scene on a shuttle bus with a driver ill-equipped for the vertiginous landscape. No one has necessarily learned anything, even though Tomas does embrace a cigarette next to his son as if to kiss his lying days goodbye, and Mats awkwardly eases hysteria on the bus as if to mime manliness for his girlfriend. Rather, everyone has just returned to a state of mutually accepted denial, stocking up on new self-preservation tricks in the process. They all walk towards the camera with seemingly newfound confidence, but the imposing Alps still loom large in the background, compressed up against their figures in a way that shrinks any distance at all. 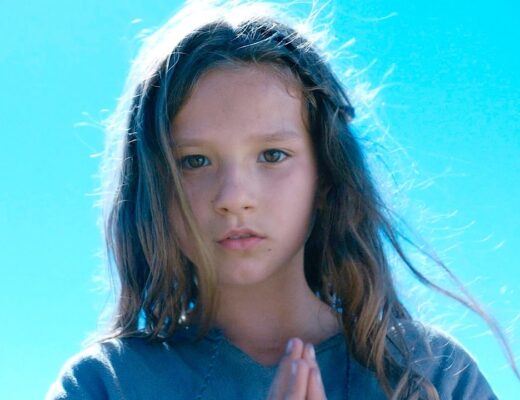 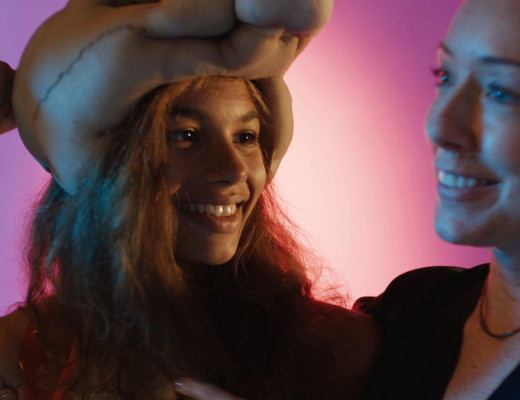 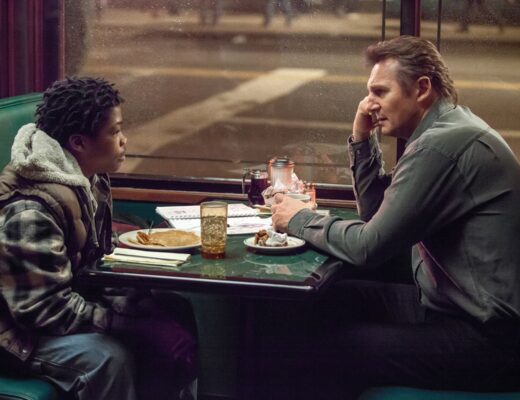