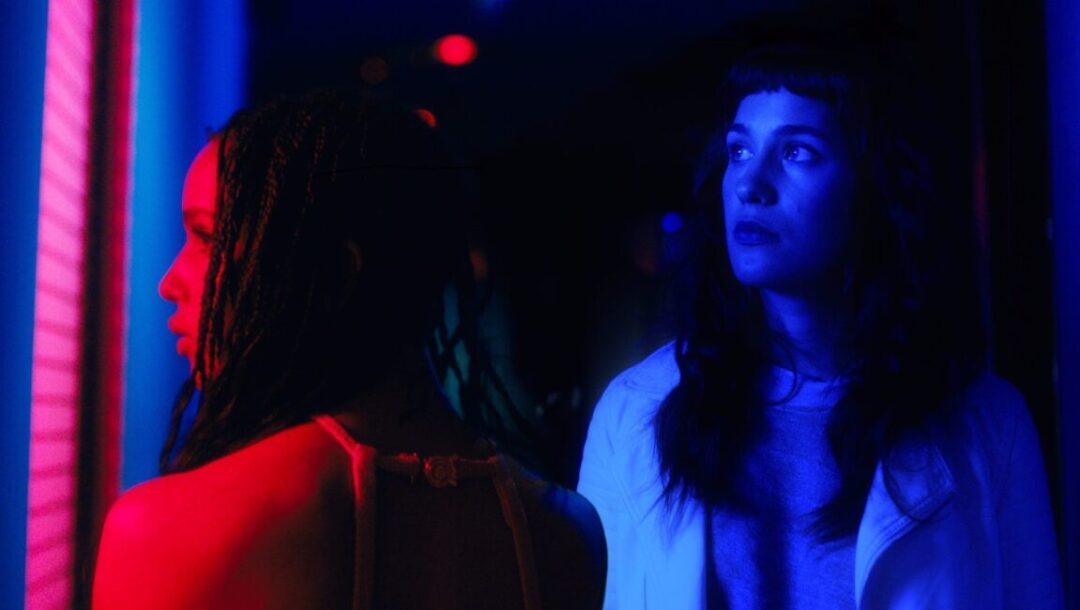 The 2017 BAMcinemafest kicked off yesterday, and it offers, frankly, a much more exciting lineup than did this year’s Cannes—especially if you have a vested interest in the Amer-indie film scene. There’s new stuff here from Alex Ross Perry (Queen of Earth), Gillian Robespierre (Obvious Child), Stephen Cone (Henry Gamble’s Birthday Party), and Aaron Katz (Cold Weather). For InRO‘s first dispatch, you’ll find a couple of the aforementioned covered, in addition to some even more under-the-radar titles. Check back here over the next week for more, and find the fest’s full schedule here. 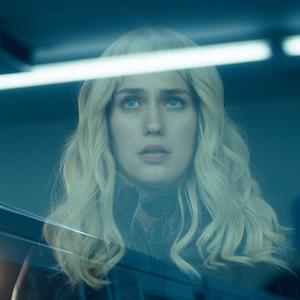 Aaron Katz’s glossy, very surface-conscious mystery opens in high style with an upside-down shot of twilit palm trees, cool vaporwave beats easing the transition to additional moody images of crepuscular Los Angeles environs (Andrew Reed’s the DP, Keegan DeWitt did the music). While 2014’s Iceland-set comedy Land Ho!, co-directed by Martha Stephens, was a more severe geographical departure, Gemini affirms that the far staider Portland and Brooklyn settings of Katz’s previous films are now thoroughly in the rearview. The atmosphere isn’t just vapid postcard prettiness, since the plot concerns troubled Hollywood starlet Heather (Zoë Kravitz), her personal assistant and friend Jill (Lola Kirke), and a sudden act of violence. The handsome drive-by shots of Hollywood streetlife and sumptuous slo-mo walks through a karaoke club do well to punctuate the stretches of mundane dialogue, like frustrated director Greg’s (Nelson Franklin) Scream-like rundown of potential suspects, or Jill’s utterly opaque behavior around detective Edward Ahn (John Cho). (Definitively announcing Gemini as a neo-noir exercise, Jill even makes herself over with bottle-blonde hair). Kravitz brings a checked-out sadness to Heather, and James Ransone is a clutch supporting player, as he was in Sean Baker’s like-minded recent LA-set indies Starlet and Tangerine. Katz is better at setting a mood than he is at orchestrating complicated plot points, and the film ultimately peters out, but it is a gorgeous bauble for awhile. Justin Stewart 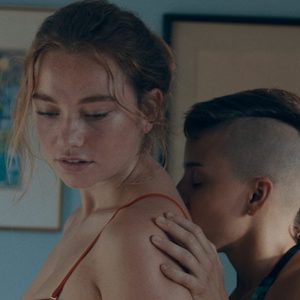 With Princess Cyd, Chicago-based director Stephen Cone extends his interest in exploring the push-pull of the mind, body and spirit, with a generous emphasis on the latter not typically seen in the landscape of independent film. Leaving the mega-church community of Henry Gamble’s Birthday Party for the Chicago burbs, Cone turns his eye on Miranda Ruth (Rebecca Spence), a successful author and local celebrity, and her 16-year-old niece Cyd Loughlin (Jessie Pinnick), who visits her one summer. It’s not an unfamiliar dynamic: two family members brought together after years of unintended separation. Everyday banalities and differences come to the fore, while past histories and tragedies percolate in the background. Miranda, with her book readings and literary parties, is something of an intellectual. Cyd, lithe and athletic, gravitates to more physical pleasures. In a sense, the film is a mid-life crisis movie (Miranda’s) crossed with a coming-of-age story (Cyd’s) — an exploration of the different pleasures that people derive from life, and the beautiful fact of that individuality. (A stern, yet affectionate conversation between Miranda and Cyd makes this explicit.) Without the coruscating, kaleidoscopic structure of Henry Gamble, however, Princess Cyd occasionally veers into more schematic territory: the thematic purpose of stray moments occasionally takes precedence over the film’s minor characters. But there’s an earnest, searching core that tempers that impression, even when the script skews blunt or contrived. (An attempt to inject some drama into Cyd’s budding relationship with Katie, a girl that she meets at a local coffee-shop, is rather ill-considered.) “Respect” is the key, as Miranda tells Cyd, and that’s something that Cone’s film understands completely. Lawrence Garcia 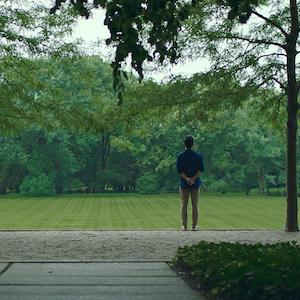 While it’s exciting to discover completely​ unknown directors, it’s equally—if not more—interesting to watch a (relatively) well-known artist transition into feature filmmaking. Making his debut with Columbus, Kogonada (best known as a video essayist for Criterion, Sight and Sound, and others) channels his talents into a clearer narrative mode, charting the chance meeting of two lost, kindred souls in the architectural haven that is Columbus, Indiana. The pair in question: Jin (John Cho), a translator of literature who travels to Columbus after his father (a professor of architecture) is hospitalized, and Casey (Haley Lu Richardson), a lover of architecture who’s lived there all her life with her mom (a recovering drug addict). While many debuts are characterized by a kind of unbridled, messy sense of play, Kogonada’s has a meticulous formal control that, at least in concept, is admirable. It’s not a video essay, but it’s similarly conscious of making each shot count. What it shows is a director clearly thinking through every moment, but often laboriously so. The film practically annotates itself, commenting on its own visual and narrative strategies (“Asymmetrical, but also still balanced”), its attempted tone and mood (“something a little more subtle…less obvious”), and even the choice of subject (a “crisis of interest”). There’s definite potential here, but the overall impression Columbus leaves is of a hermetically sealed idea, an airless rumination on architecture and our interaction with it, characterized mainly by fastidious compositions (so relentlessly symmetric they’d make Wes Anderson blush) and plodding earnestness. And while Kogonada is adept at crafting gorgeous images, his ability to direct actors is sorely lacking, a fact underscored by the bland, generally “meaningful” dialogue. Put another way, Columbus has the inner life of architectural blueprint. Then again, such an object has its own sort of beauty. LG 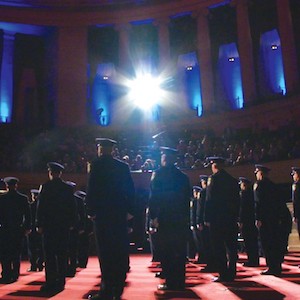 Exciting, fascinating and mostly well-rounded, Peter Nicks’s The Force follows the Oakland Police Department (and by proxy, the citizens and city of Oakland) for two years, with filming having commenced in 2014. Both time and subject are suited for examination; we see the department heads repeatedly harping on the crucial-ness of due protocol in the fiery aftermath of Ferguson and the birth of the Black Lives Matter movement. And the OPD has long been the subject of controversy—they have been under federal oversight since a 2003 incident and court settlement involving corrupt tactics (the same kind of oversight that repugnant current Attorney General Jeff Sessions seeks to remove). The department is clearly bracing under the oversight by both the feds and new (and still current) tough-seeming mayor Libby Schaaf, so we mostly see them on their best behavior. That said, we also witness body cam footage of questionable police shootings of civilians, including a horrifying clip of a man seen writhing, shot 13 times (he had a knife). The daily morning football chants and shouts of “We are warriors!” speak to a militarized culture Schaaf sums up as “toxic macho” in response to a late-breaking scandal involving sex favors from an underage girl that ensnared 16 OPD officers and lead to the forced resignation of Chief Sean Whent, a major presence here. Not as tough as classics like The Police Tapes or Frederick Wiseman’s Law and Order (partly because those got to even more toxic cultures first), The Force is still powerful, with Nicks bringing the same clear, equality-minded eye he showed in his 2012 doc The Waiting Room, about an Oakland safety net hospital. JS 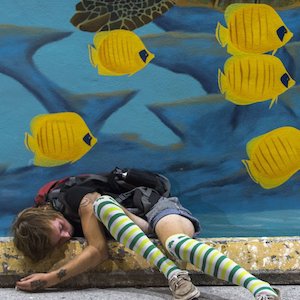 As a documentary film student newly arrived in America, director Nanfu Wang’s probing I Am Another You begins as she meets a charismatic, intentionally homeless 22-year-old named Dylan, a symbol of the quintessential notion of freedom Nanfu transplanted herself to find. After Dylan grandly announces “I’ll show you what freedom is like,” the filmmaker willingly takes on the homeless life with him for over a month, eating out of garbage cans, sleeping in parks, and eventually begging for money. Wisely, Nanfu narrates her own film, a choice which allows her perception of Dylan and his circumstance to at times supersede what is being shown on screen, and one which makes the more investigative and reflective elements of the documentary’s second and third sections more powerfully felt. After parting ways with Dylan, Nanfu reconnects with him and his family years later, setting up a far more multifaceted and affecting portrait of privilege and mental illness than the documentary’s early quixotic point of view would have you anticipate. I am Another You is messy in all the best ways, a truly fluid and open exploration piece that reflects the painful and mesmerizing complexities of life. Luke Gorham 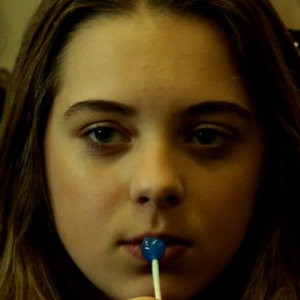 Jennifer Reeder’s feature debut is a brisk, charming story of asserting one’s identity in the midst of cultural expectations. Zaynab (the charismatic Fawzia Mirza) works as a lawyer for the Pakistani-American community of Chicago while her recently widowed mother, Parveen (Shabana Azmi), sits at home watching soap operas and peering apprehensively through binoculars at a world she doesn’t understand, hoping to spot a potential husband for her thirtysomething daughter. When a client, who’s also a former pro wrestler, offers lessons in the ring in lieu of payment, Zaynab seizes the opportunity (in her characteristically incisive words) “for existential reasons: immigration and codependency.” A drunken hookup with Alma (Sari Sanchez), the daughter of a former Mexican luchadora, leads to a tentative, tender relationship and Zaynab’s coming to reveal her true self to her mother from behind a shiny green wrestler’s mask. Signature Move‘s script (by Mirza and Lisa Donato) is attuned to the ways in which the familiarity of one’s own culture as a second-generation immigrant can be both comforting and stifling, and how generalizing statements tend to eclipse individual experience. “Mothers and daughters aren’t friends in our culture,” Zaynab says, attempting to explain the dysfunctional relationship to Alma before adding, “Well…not in my family.” The pacing feels a bit rushed and a few of the supporting characters are left underdeveloped, but easy chemistry between Mirza and Sanchez and nuanced work from Bollywood veteran Azmi, speaking volumes about Parveen in the smallest of gestures from her living room recliner, makes for a lively snapshot of women negotiating change in their lives while staying close to family and cultural heritage. Alex Engquist 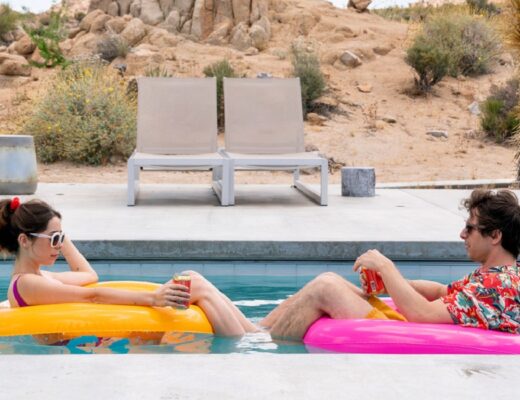