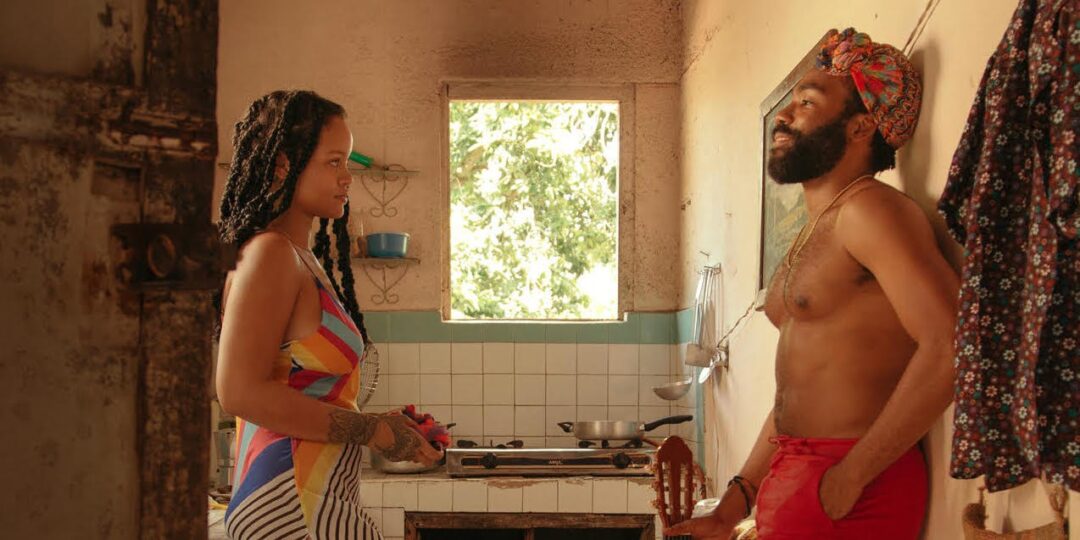 “Anywhere where in order to get rich you have to make someone else richer is America” says musician Deni (Donald Glover) early into Guava Island — a cynical musing that proves a thematic ingress for this film. The specifics of the fictional, Caribbean-flecked nation used as Guava Island’s setting are related in a dazzlingly rendered 2D-animated prologue that’s emphatic in its fable influence. Once a paradise, Guava Island has since commodified its magical silkworms under the rule of a lineage of capitalist despots. Deni, who as it turns out is actually an eternal optimist, sees the particularly western notion of enterprise as antagonist-of-freedom, and of a world of inescapable free market commerce, not as the result of geography, but rather a pervasive, class-dividing philosophy of plenty. Operating largely as a folktale, the subjugation that faces the working class in Guava Island is further emphasized, aesthetically, through typical dystopian world-building touches: the ruling plutocrats wear red, including the local, bluntly named dictator Red Cargo (Nonso Anozie); the working class, largely viewed toiling on looms and backgrounded by austere factory walls, are always robed in blue; and Deni, an employee of Red, but also someone afforded the liberty and luxury of his own radio show and community fame, is unsubtly given the surname Maroon. Against this sociopolitical backdrop, Guava Island also touches on Deni’s relationship with his girlfriend, Kofi (Rihanna), the couple’s shared dream of free living and their pitted worldviews (his idealist, hers pragmatist), Deni’s attempt to throw a music festival for the people (a joyous reprieve from a seven-day work week; Red, though, is convinced that no one will show up to work following a night of carousing) — and the tragedy inherent when resistance meets status quo.


The limited ambition chosen and structure of Guava Island — expository dumps bridging the distance between musical interludes — make the film register as a sort of anti-Lemonade.

Built around a handful of Donald Glover a.k.a. Childish Gambino impromptus (“This is America,” “Summertime Magic,” and “Saturday”), Guava Island plays as a lo-fi, Soderberghian micro-indie musical. The film, which was shot in Cuba, features unassuming, pastel-colored concrete facades, and its digital cinematography has been treated with grainy, 16mm-imitating after-effects, both serving to aid Glover’s bid for ‘chill vibes’ – stripped away is the expected high-budget sheen. Director Hiro Mirai (who previously worked with Glover on the TV show Atlanta and on his 2018 music video, “This Is America”) opts for a home video quality that extends particular grace to the pared-down musical set pieces, the highlight being a seaside serenade set to “Magic” which ends with an anxious Kofi softening enough to join Deni in playful dance, a moment briefly captured in a wide angle shot that emphasizes a shared, kinetic unity, as well as the smallness of humans who are systemically oppressed. However, the limited ambition and chosen structure of Guava Island — expository dumps bridging the distance between musical interludes — make the film register as a sort of anti-Lemonade. Where Beyonce’s work benefited from its weaving of sleek, disparate visuals (thanks to a roster of auteurist lensers) with avant-garde narrative vignettes, Murai goes for an easygoing tenor and a simple plot line, both of which too often serve to spotlight his film’s inadequacies. Rihanna, on the other hand, plays Kofi with knowing skepticism and acuity, salvaging the thankless role she’s been given. But it’s inconceivable as to why Rih’s been stripped of the mic, and it’s genuinely regressive the way Kofi is relegated to the role of a doting woman who ultimately kowtows to Deni’s charms and ideals. This confluence of mistakes gives Guava Island the unambiguous feel of a vanity project; it bets too much on the appeal of its relaxed approach and on its star-power. Had it embraced more of the mysticism introduced in its prologue, it may have been the kind of oddity it’s striving to be. Instead, this is a right-minded, but merely diverting, yarn, one that’s successful in fits and starts but lacking in vision.

You can currently stream Hiro Murai’s Guava Island on Amazon. 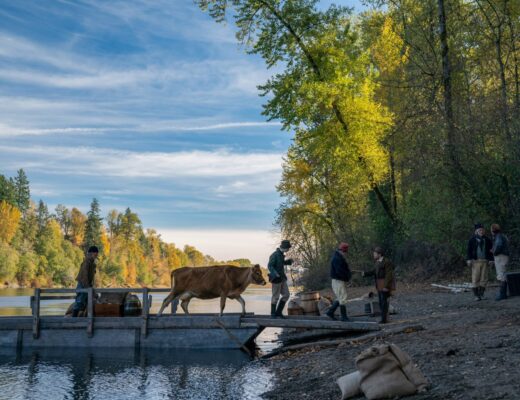 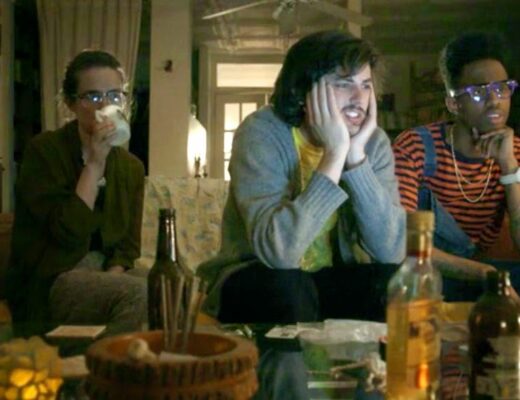 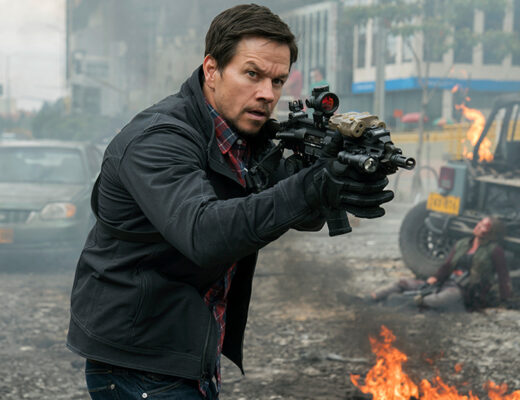